They say we die twice. 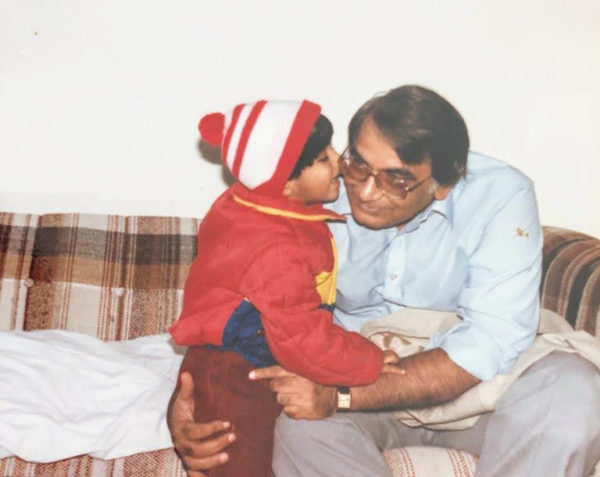 This is a picture of me and my uncle (who I call “Mama”) taken when I first moved to Michigan from India. Mama was the world’s greatest listener, as you can see even in this picture.

He passed away in February of this year.

Almost ten years ago, when I left the DA’s office, I flew to Hong Kong to celebrate Mama’s 80th birthday with him. While there, I interviewed him for 3 days straight, in his office, from morning till night, and I tape recorded every minute of our sessions. I still have the recordings even today.

In the three days we sat down, I went through Mama’s entire life journey of eight decades. We started in 1932 and covered every continent and every country he had ever been. He told me about the very first time he tasted a pineapple or heard a gramophone. Mama described the day he met my aunt and how a ballpoint pen brought them together. He recalled twice jumping out of a plane because of an emergency landing, and once he had dinner with the Queen of Spain. In his life, he was gifted keys to the Panama Canal, saw Mahatma Gandhi, and even survived the bloodiest partition in human history.

None of these things defined him, though. What defined him was that he was the most altruistic human being I will likely ever know.

After his death, I turned the recordings into a book that I shared with all our family members.

Most in our family did not know all the stories that were in the book, especially those from Mama’s childhood. And some expressed regret that they wished they had taken the time to learn more while he was alive. To me, the book was less for those in our family who knew him, but rather for those in our family who will not (our children and grandchildren). Hopefully, by reading a bit more about him, my children can one day learn more about me, and how Mama helped shape many of my own thoughts.

There is a saying by Bansky that means a lot to me, especially as an estate planning and trust attorney. It goes something like this: “They say you die twice. One time when you stop breathing and a second time, a bit later on, when somebody says your name on Earth for the last time.”

Irvin Yalom, to whom the quote should probably be attributed, said in more detail:

“Some day soon, perhaps in forty years, there will be no one alive who has ever known me. That’s when I will be truly dead – when I exist in no one’s memory. I thought a lot about how someone very old is the last living individual to have known some person or cluster of people. When that person dies, the whole cluster dies too, vanishes from the living memory. I wonder who that person will be for me. Whose death will make me truly dead?”

Irvin D. Yalom, Love’s Executioner and Other Tales of Psychotherapy

While we cannot prevent the first death, we can all prevent the second. May each of us find time to connect with those souls around us who are housing treasures of knowledge that may soon be lost, so that we can ensure that their names and stories will always be whispered about, even for generations to come.

Here’s to you, Mama!

To your family’s success